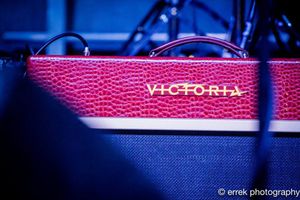 Brent and Nick are proud to announce their endorsement by Victoria amplifiers. In 1993, founder of Victoria amplifiers Mark Bauer set out to faithfully recreate the crown jewels among the many classic amplifiers developed by Leo Fender. The tweed amps of the late 50's defined the sound of rock and blues on vinyl and on stage, but they had also become increasingly scarce, and well beyond the reach of most working musicians. Since then Mark has developed his own original line of amps as well.

Nick is currently playing the Victoria Golden Melody and Brent plays a 20112 Deluxe, Victoriette and a 5112 Champ Style amp with a 12' inch speaker.

You can hear the 5112 and the Golden Melody exclusively used on our new record "Two Wheels Down a Lost Highway".

Thanks for your support Mark, we are proud to be a part of the Victoria family!